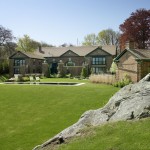 The property at 145 Harrison Avenue in Newport sold on December 6, 2010 for $6,800,000. Lila Delman Real Estate was both the listing and selling company. PresidentMelanie Delman and Broker Associate Robin Nicholsonrepresented the seller; Broker Associate Cynthia Morettirepresented the buyer. This ranks as the second highest sale in the city of Newport in 2010. Lila Delman Real Estate has participated in the top 5 sales, including the highest sale, in the City of Newport, and eight of the top ten residential sales in Rhode Island for 2010.

The house was designed by Stanford White of McKim, Mead and White, and built in 1881 for Edwin Dennison Morgan III, of the J.P. Morgan family. The property was later owned by world famous sculptor, Felix de Weldon. The carriage house was used by de Weldon as a studio, where he created his most famous statue, The Flag Raising on Iwo Jima. Officially known as the United States Marine Corps War Memorial, this statue is displayed at the Arlington National Cemetery.

The property includes three acres of rolling lawns that meet Newport Harbor, sprawling views, and an 11,000 square foot residence which has been renovated with the ultimate in detail, quality, and finish.