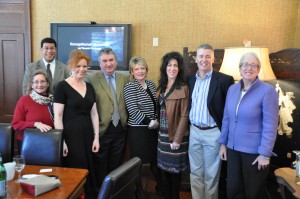 NEWPORT, R.I. – Drawing attention to the importance of the state’s real estate market to the health of the overall economy, the head of the Rhode Island’s Economic Development Corporation met last week with representatives from Lila Delman Real Estate and their prestigious UK affiliate, The Mayfair Group.

Seated in the upstairs conference room of the firm’s Memorial Boulevard offices, the group enjoyed a lively discussion on topics ranging from the use of social media to the broad international appeal that Newport holds to prospective homeowners.

Stokes touched on some familiar themes: Newport’s historic character, the compact nature of the state and its proximity to major urban hubs such as New York and Boston, and the importance of the city’s rich maritime heritage.

But there were some new ideas as well. Melanie Delman, president of Lila Delman Real Estate, spoke to her firm’s experience in enticing overseas buyers to invest in Newport.

Mayfair International Realty principal Nick Churton remarked, “Perhaps I think of Newport as larger than it is.” According to Stokes, from the visitor perspective, it is. In addition to Stokes and Delman, the group also included Churton and his associate, Annette Reeve; RIDEC Director of Business Development Katharine Flynn; and Newport City Councilwoman and Lila Delman Realtor Kathryn E. Leonard.