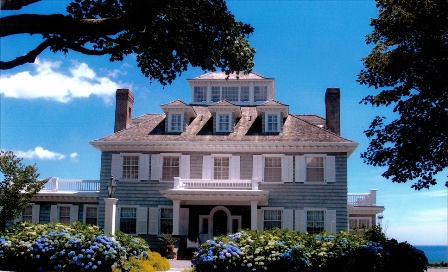 WESTERLY — When Kevin Wendle came to stay at the Ocean House earlier this summer, he fell in love with Watch Hill. So much so that the man once named one of the “101 Most Powerful People in Entertainment” by Entertainment Weekly decided to buy a piece of it.

On Monday, Wendle completed his purchase of 10 Bluff Ave. for $9.75 million, according to John Repoza, a broker with the Lila Delman Real Estate Agency who represented Wendle.

“It took only forty-five days from contact to closing,” said Repoza, noting that the house was on the market for “about seven or eight months.”

Repoza said that Wendle had been looking in the Hamptons but “fell in love with Watch Hill.”

He said his client is based in Paris but owns properties all over the world: “Los Angeles, Miami, and New York.”

The house, which sits on 3.9 acres facing Block Island Sound, is located between the Ocean House and the mansion that Taylor Swift bought for more than $17 million.

“It’s miraculous what’s happening with top-tier properties in Rhode Island,” said Repoza, a Charlestown resident with more than 24 years of experience with residential real estate. “But it’s about time. The luxury market all started here.”

Repoza, pointing out that Newport is often called America’s first resort, said that Rhode Island was recently referred to as “the new Hamptons.”

Lori Joyal, the managing broker at Lila Delman’s Watch Hill office, who represented Nancy King, the seller of the Bluff Avenue property, said the luxury market is definitely on the “uptick.” “The Ocean House has been an extraordinary boon to this area and has brought people here from all over the world,” said Joyal. “We’re lucky to be here.”

“There’s a lot going on in real estate here…there have been numerous sales” Repoza said. “It’s worth taking note.”

Wendle is chairman of K2 Labs, a venture capital business. He was a co-founder of the Fox network, E! Online and other media businesses and helped develop “The Simpsons” and “Beverly Hills, 90210” television series.